I had a "surprise" operating session, on Saturday in which Roger and Stuart arrived early afternoon, followed by Doug and Jon, later that day.

The layout got a workout, along with my sound equipped locomotives.
Roger was almost fixated by the Intermountain ES44DCs with sound, and alternating ditch lights.
Jon and myself shunted each end of the yard, breaking up 347 and assembling #166.
Stuart worked the ringer off #347.
I also took time to outline my operating ethos, and exhibition operating stance, Doug took notes!

A couple of things became apparent, and in my effort for continual improvement, the following are issues and mitigation.
1. Roger noted that after a couple of hours your feet got sore operating on tiles.
Mitigation:
I will install rubber mats in the operating zone, aisles, cheepies from Bunnings, see how they go.
2. Doug for some reason likes to read his latest VR book in the middle of the layout:
Mitigation:
See if I can get a small couch in the operating area.
3. I found myself back and forward between the kitchen fridge and the layout.
Mitigation:
Please see below, Tanya had kept my old first fridge, and guess what, it fits right in the bar, perfect!
4. lack of space for issuing train orders and paperwork.
Mitigation:
I knocked up some square tube 25.4 mm from Bunnings, I was shocked they actually had stock!  I removed the wooden legs, and hey presto, I have access to all the cupboards and work shelf.
I got this idea from another blogger, North Coast NSW, I think, and he had the whole layout supported using this method, thanks for posting man!
5. With five blokes in the layout area, and the down lights on, it started to get a bit sweaty:
Mitigation:
Turn A/C on!  further mitigation, I will replace the halogen globes with LEDs, might as well plug some more in while I am at it.
6. Roger commented that the turntable still not working.
Mitigation:
Soon Roger, soon! 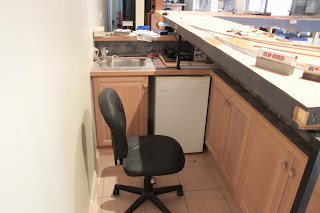 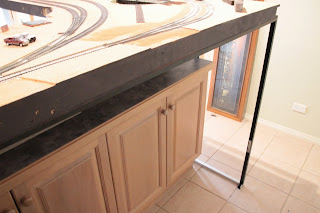 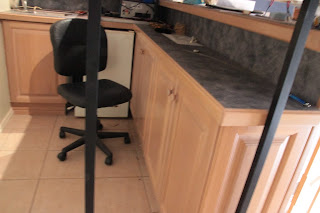 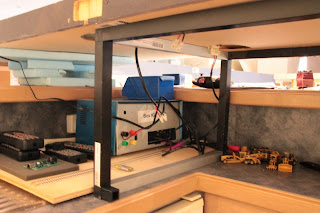 other things in progress, the foam has been ordered for the completion of Alice Springs, and enough for the next layout.  Stand by....

Thanks to all that contributed to a great lazy day operating, thanks guys, I had a blast, and the layout performed like clock work.