So I spent some time fiddling with the concept of two or three sidings.  Each time I looked at designing a layout around Spencer Junction, I insisted on having Whyalla, this reduced the running distance from yard to fiddle yard where you would loose the concept of seeing trains moving in the landscape, and the space was sucked up by Whyalla or the fiddle yard.

Here is the link.
http://barcoola.blogspot.com.au/2012/06/layout-proposal-spencer-junction-sa-and.html

How do i get out of this loop of design failure?  I started with Spencer Junction yard.  This has to be long enough to have decent length trains,  as the yard curves in one direction.  So I plotted this round the edge of the room, with the thick part of the yard at one end of the room.  So, i now have a decent sized Spencer Junction.  Whyalla would fit inside the middle space, but I was looking at increasing the mainline run, so i used the pennisula design from Everett - Skykomish.  Just plonked it where I thought it should go.  The end result is something I could turn into Wirrappa looking curves.  Joining the dots, Spencer Junction north to a "Wirrappa" type loop, on a reverse curve, with space for a triangle.  On the opposite side of the peninsula, something like the "Wirrappa" curves, at the end of this I put a triangle.  One way would lead back into Tassie street, thus satisfy Dougs want for continuous operation.  The other lead I thought dead end staging sidings.  Thus, traffic could go from the staging into Spencer Junction, shunt as required.  Depart Spencer Junction, for a "Wirrappa" type station, around the reverse curves.  Then back into the staging sidings.  For the line to Whyalla, as it goes upgrade to the bridge I thought of just continuing the grade up and over and into the staging sidings, upper staging.

Now all of the above is great on paper, but I need to incorporate what I have learnt from Alice Springs.  Appropriate space for people.  Minimum  width of 2'4" standard width of 3' lift out section for easy access, I have an idea that will make install and removal easy, without locking and adjustment.

Operations
Alice Springs was all about trains terminating and shunting them out.  Spencer Junction is about trains going four ways, originating and terminating.  And re marshalled.   So, full use of things like the motive power sheet, TIMS could be really cool.  The Tea and sugar could shunt at "wirrappa" on its way west so that could be fun too.
Ultra modern could also be possible as the yard has not changed that much.

Anyhow here if the plan. 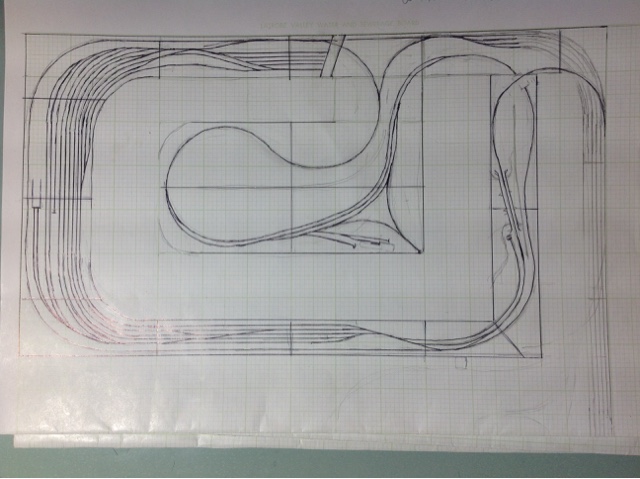 Posted by Scott at 14:04 No comments: Links to this post

Here is the second.

http://youtu.be/dj5DIdUhCMc
Posted by Scott at 18:13 No comments: Links to this post

Dave made a comment at the last operating session. Dave really likes running trains through dramatic scenery, and what about three loops so we can go loop to loop.  Doug agreed.

The ops sessions are not all about what I want to do, if I can enable both the operator and the player in us all have a go, that cant be bad can it?

So I thought about it for a while, updating my Port Pirie plan, http://barcoola.blogspot.com.au/2016/02/proposed-new-layout-concept-port-pirie.html

A wiggly peninsula with a reverse curve could lend itself so well to mountain railroading.

Could I do something similar around Everett and Skykomish?

The inspiration is the picture below.  low clouds deep ravines and high mountains, air horns bouncing off the valley walls.  Things that are less OZ more acceptable in the USA. 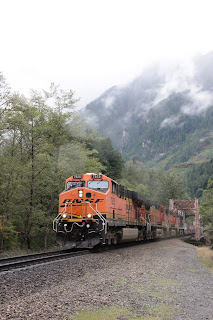 Using the three loops concept, and taking the dramatic bits of the Everett Skykomish area.

I managed to squeeze in three loops, however I would need enough work so the shunter in us all does not get thumb twiddles.

So I added a Sounder service to Marysville, Marysville is the first loop north of Everett, my thoughts is it could be an extended Sounder service from Everett.  Marysville has a few low swing bridges on the approach, really photogenic (see below)  Additionally there is plenty of forestry type of industries around.  Bayside yard used to have a shingles factory, so something that could take acid tankers and wood chips would be good.

Other additions would be a food distributors at Marysville, just because I can, I picked this from a location in Tacoma,

Again this sort of low water area would be a real challenge in HO.

Between this location I would like to have a big deep bridge, and then straight into a tunnel bore, again there is a great prototype for it at Stevens pass.

On to Skykomish, this place is very historic, and the photos below will give you an idea.

A forestry branch near Skykomish, if you google earth it, you will see a short branch facing Skykomish, I would like to see a more substantual branch, good for wood chips and other forestry products.

The wagons would have to be left in a siding near Everett so a shunt movement to and from marysville would be required.

Just south of Marysville is this swing bridge..
Very photogenic, already looks like a Walthers kit. 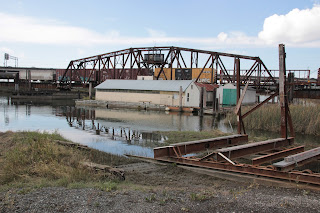 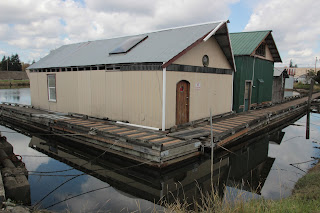 Skykomish is a spectacular place even in the rain. 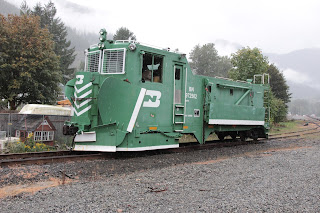 Here is the snow plow - spreader allocated to Skykomish. 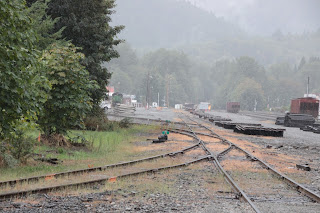 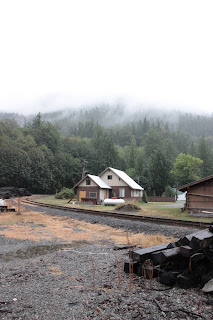 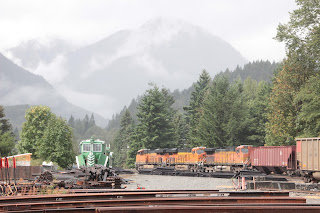 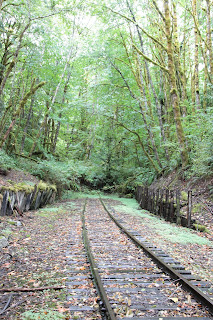 The end of the triangle - amazing. 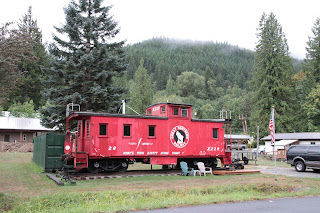 a Caboose in someones front yard. 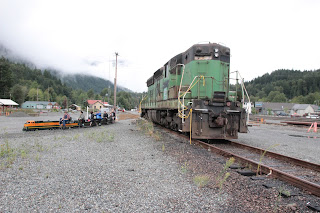 The SD9 at Skykomish with a model Dash-9 making the rounds. 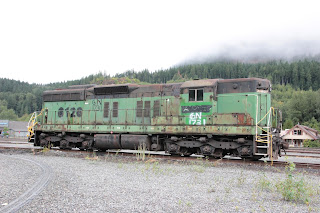 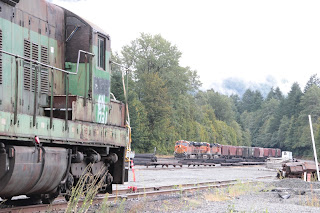 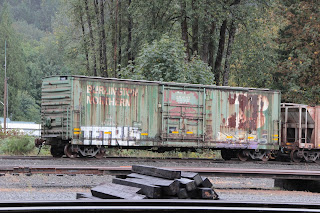 Irresistible weathering on this box car in the yar. 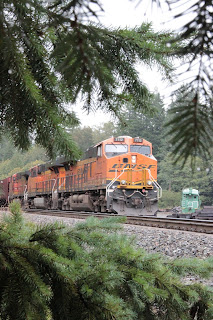 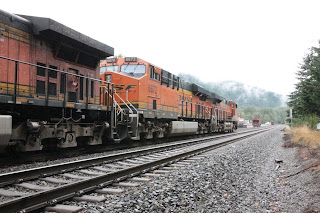 Some shots around town. 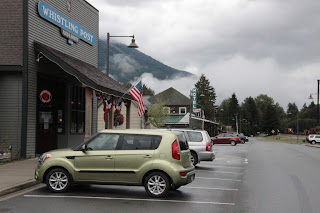 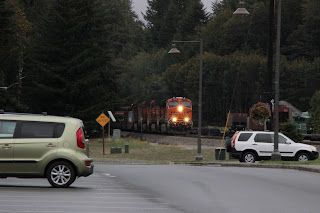 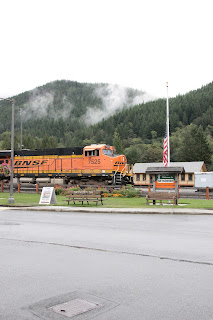 Further down the pass a near a summer camp is this great peak a boo shot.  This is sort of what I see as the essence of this part of the pass.  With the new Walthers bridge kits this should not be too hard. 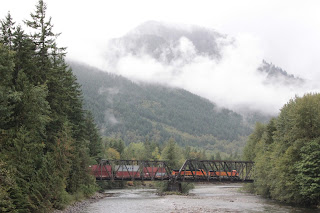 I guess this type of layout would get me out of my comfort zone, lots of trees and rocks, thus very learn by doing type of approach.  It might make me a better modeler scenery wise.  I still figure this is my Achilles heel.

Rolling stock wise I have enough for at least three trains and two sounder sets.  None of it weathered at the moment, Time will l tell if its a priority.

I think there is nothing like a flight of fancy as they say, mid size layouts are a challenge not to put too much in.

When its all said and done, modelling USA railroads is kinda easy, lots of research material is available, fine inexpensive models are available and with sound!  Having said that I have not seen any manufacture produce a a proper GP38-2 in BNSF swoosh!

So I guess I will plan this for a possibility, if not, for me to learn.

I had looked at a similar design with AN in mind, I am still playing with that, but its not a good reality, too much of a buy in required for it to look real.

Anyway, its a thought and figured I would share it.

Posted by Scott at 20:44 No comments: Links to this post

Firstly I must thank, Roger for helping with setting up the locomotives for this session the night before, and driving the apple TV and Youtube, you got the hang of it!

So in less than 24 hours we took down the remaining parts of Barcoola and got Alice Springs up and running, locomotives tested and wagons etc positioned.

I must thank the operators who, without them would not have happened, in no particular order.
Bill for his first "pull of the throttle" in Alice Springs in HO, you did a great job on the Ghan, followed the instructions to a T, its A little tricky! Onya!
Doug (late comer)
Dave (could not get him outa the ute!)
Rick (thanks man, learned sooooo much about Canada)
Glen, (the admiral).

here is some pictures I set up following the Ops session. 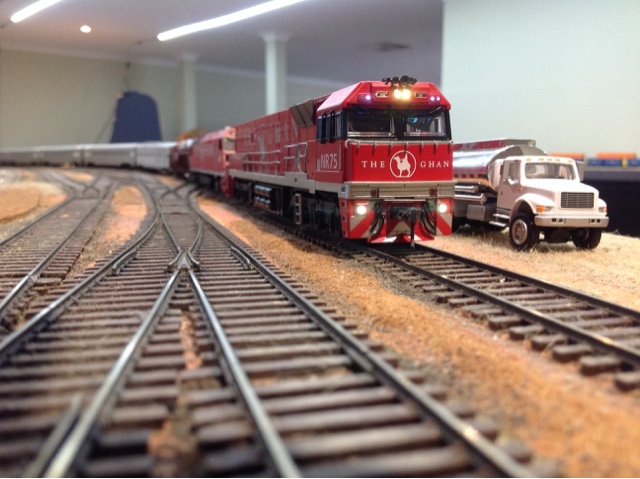 AD8 with AN3 attached, is fueled by Tim the fuel man, at Alice Springs prior to departure to Darwin 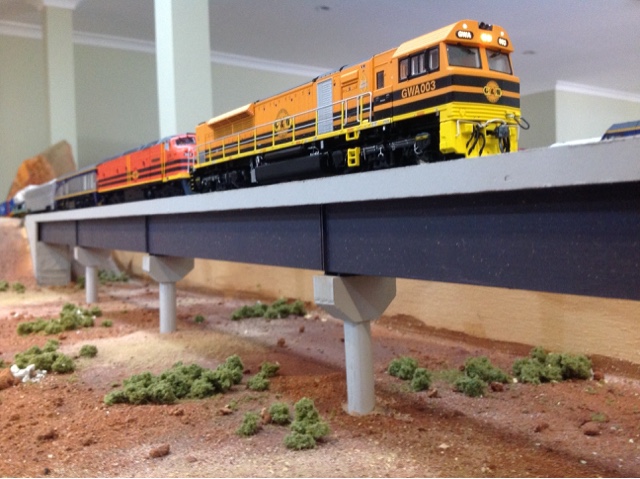 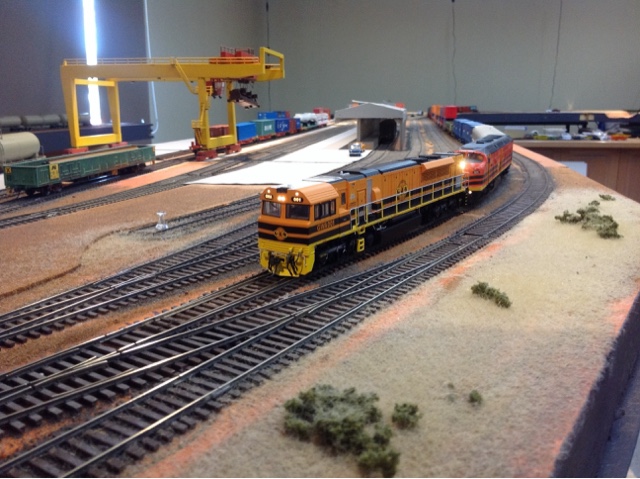 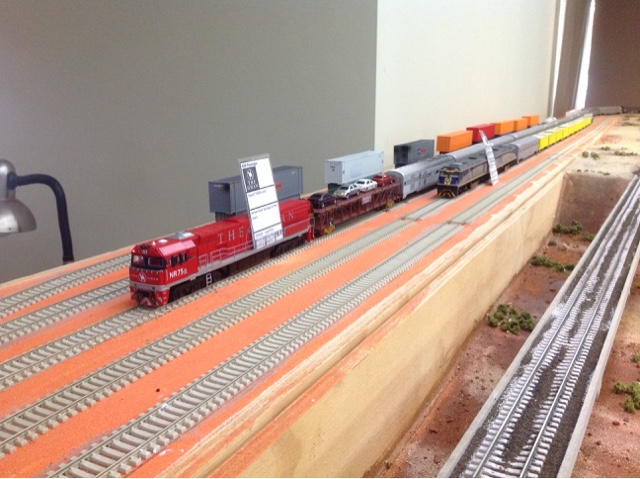 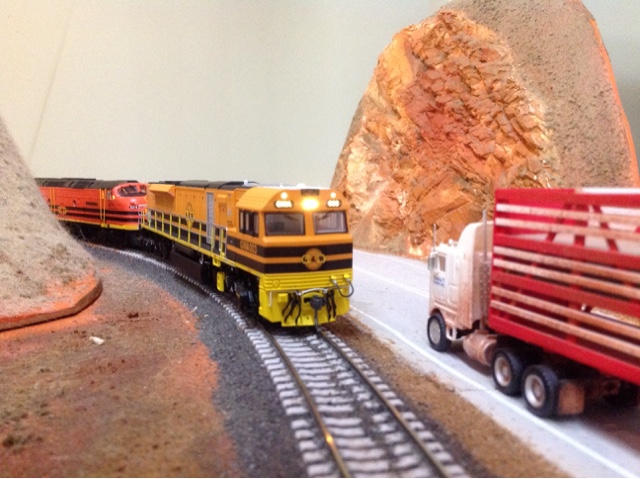 I made up some operational cards with instructions for each train of shunt.
See below: 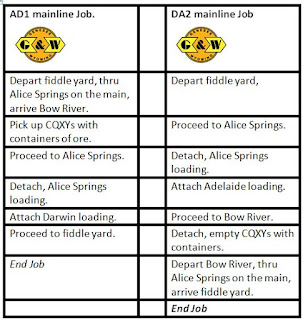 
While this is a great stepping stone, have plenty to do.
1. Get an Apple TV for the front room with the comfy couch.
2. Another standby couch so everyone is comfortable.
3. Another coffee table.

Train wise, here is a short list of things I need to do.
1. get stacks of custom decals apply then and then start the weathering. (Dougs comment noted).
2. Sound chips to install.
3. change out the last of the Auscision type couplers.
4. Change the wheels on the FQAYs.

I am concerned that once again we were let down by the performance and erratic behavior of the Southern Rail Models L class, this time 3103, So thats two failures so far, and I have not run the third unit.... yet!  Very disappointing for a new out of the box model.

Layout wise.
1.  Rebuild one side of Heavitree gap, Dave is itching to get into that.
2.  Fencing, for the industrial area.
3.  Cover all the buildings.
4.  Get the turn table operating.
5.  Triangle board for Bow River.

I will just pick away at the items above, and we will see how we go.