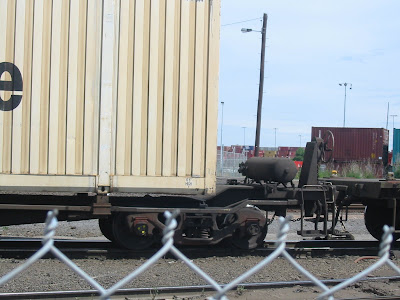 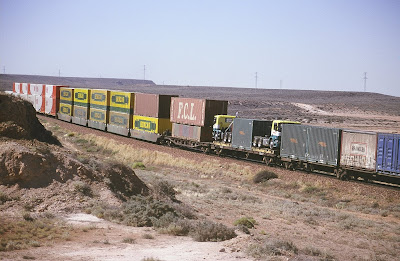 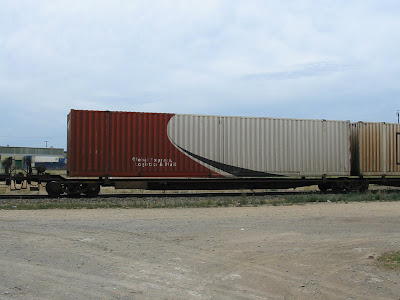 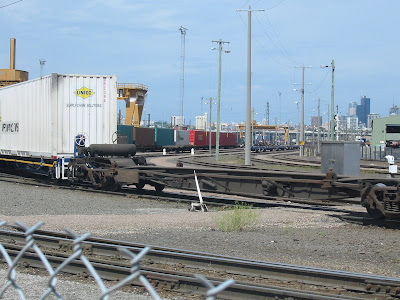 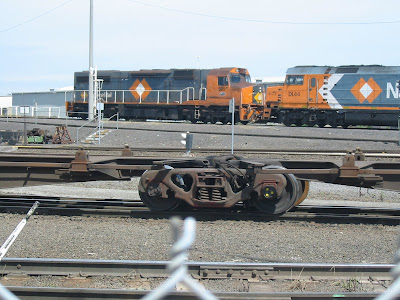 Further to my last post, a follow up request has been made, in regard to TRAY's, These are Low profile 5 pack skeletal container wagons, I believe these were among the first non AN designed intermodal wagons for the Private operators in Australia.

Long story short, to help NRC get their operations up and running, NRC were granted a honeymoon period where NRC had a total monoply over interstate freight operations. No Private or non NRC operations of Freight could take place.

After this period, any operator could contract anyone to run trains on their behalf or as a stand alone company. The most notable front runners was Specialised Container Transport (SCT) and Thomas National Transport (TNT).
Both operators ran Perth to Melbourne services via Adelaide, with AN and Vline as subcontractors to haul these services, Westrail kicked in then out.

The TNT train was quite impressive at start up, with stacks of TNT cream and orange containers, half stacks etc. Running with AN power Adelaide to Perth.

In the late 1990s TNT had a number of TRAY's built, I have seen up to TRAY 1004 but there may have been more, without going through my records on the subject.

They would be at the front of AP4, marshalled behind the relay van and before a PQYY, in standard configuration.

The TRAY was very low profile and as such had a goose neck at each coupler end as the platform was lower than the coupler height. The wagon usually carried 10ft 6" high containers on the platforms and stacked on top were half height containers of equal length, I am going to say that they are 53ft in lenght but some Auto box containers are 51ft 6", some times its hard to tell. All I know is that the half height containers can carry cars, having spotted on being unloaded at TNT's auto facility in Wingfield.

Modelling notes:
TRAY is a one off, I have purchased a set of Athearn "fuel Foiler" five packs, as a start, then center sections are only 46ft long, but are the correct low height platforms so they are a great starting point. The ends angle back up slowly to the coupler heights so this will be the most difficult part of any build, the goose neck etc will have to be scratch built.

BGB make the applicable 53 or 51ft 6" high cube container, and the Swoosh decal set. I found that the BGB containers not quite straight, just a casting thing. Therefore at the time of contemplation I was looking at scratch building all the containers as one complete block.

Anyway, attached are some pictures of the subject wagon, one on AP4 its the one in the distance at the head of the train.
Also note the 63ft container flat with new Toll prime movers, great load to model, rarely seen in model form.