Its well noted that operators like lance Mindheim and Bernard Kempski are passionate about operationally intensive layouts, Lance with CSX in Florida and Bernard with the Port of Los Angles (PoLA).  Both these layouts have a heavy industrial slant, and closely match prototype operations, with switch lists, etc,

There is no doubt that these types of layouts are interesting, operationally intensive, and compact, thus perfect for a little one bedroom layout.

Australia is not devoid of such prototype examples of such industrial branches, but in the US they are everywhere.
However, I reckon there is something to be said for grain branches, there is a bloke doing the Longsport and Indiana which is almost solely based on grain operations.  I thought to myself, there has to be something more to this.
Initial observations would suggest that the modeling of Grain operations would be too simple to be entertaining.
However, I reckon grain operations can be interesting and operationally attractive, and in some cases more entertaining and involved than a traditional industrial branch.

I have looked long and hard at the now former GWA branches to Loxton and Pinnaroo.  Observing these branches in operation, showed me that there is definitely more to this than meets the eye.
Lets first look at the entire operation, any train from these locations will require at least three crews, or two if its relay worked, yes there were relay grain trains on the loxton branch.
Both branches were converted to standard gauge, Loxton in 1996 and Pinnaroo in 1999.  Thus trackage was greatly simplified, this was based on the then current practice of locating empty wagons at two or more locations, so a long train would be a short train by the time it gets to its destination.
Thus there is lots of work opening sidings and locking them before continuing.  This operation is fairly simple, but still time consuming.

Vitara and AWB changed all that, with road transportable high speed loader and an operational change where one silo would be served by one train.  I guess this would cut down on local silo staff, as only one shift loading staff would be required, at the one location.
However this operational concept would make the job harder for the crews, most of these sidings were not built to load an entire train.
This means that the loop road would be too short for a full length train, to add to these issues, the town would normally have main or access road cross the mainline right at the end of these sidings.
This means that you cant block the road to load wagons at the silo, the train will have to be loaded in sections.

Now things are starting to get interesting, and we are only talking about one short loop siding.
The original Loxton station is basically at river level, and out of town is a steep grade to get back on to the plateau.
A new high speed loader was built out of town on the top of the grade, this changed the way these trains operated.  Eventually the trackage in Loxton was an additional expense, and this section of the line was taken out of service. 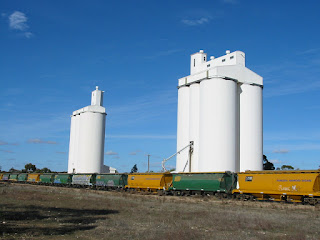 Later GWA built a single siding at the loader, however this was only long enough to take locomotives and a relay van, this means that complicated shunting moves were required just to get all the locomotives back on the front of the train.
Thus you could model a branch such as Loxton with four or less points, means that they can be made lockable, (point motors and a key switch to simulate the locking and unlocking of points) doing 50 points like this would be time prohibitive, four now that’s possible.

Due to the trackage, only 3000Hp locomotives were allowed to operate on the loxton line, 25 to 30 KPH. This would greatly increase transit time over the cycle.
The Pinnaroo line was only good for 2000Hp locomotives.

In the 2000s is was possible to have just about any type of locomotive operating on the grain branches.  Grain wagons were limited to CGAYs, AHHEs and AHGXs, the later two became the last to operate on the lines, in a 31 wagon rake (mix of AHGX and AHHEs), some of these wagons were ex Manildra and still had their yellow livery underneath.  Auscision to produce the AHGX, and a re-run is promised. 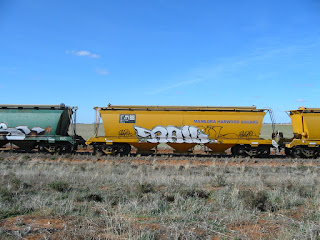 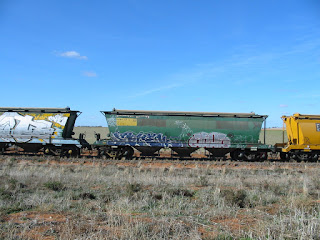 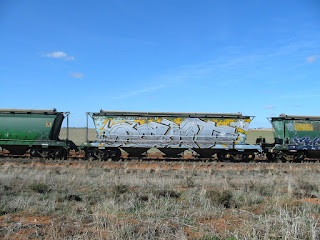 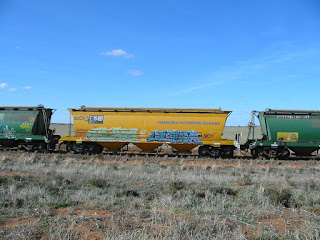 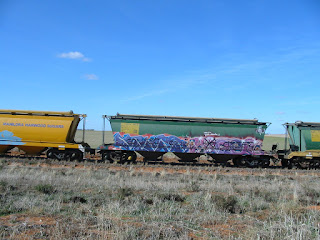 In this era it would be interesting to model some of the AHGX with graffiti, this would individualize your train, and set the era.

Other effects can be added for operational challenges such as:
• Train order working, including issuing Train orders to crews and repeating back the order etc.  Thus increasing the realism to the operators and increasing the wait times.
• Twist Handles on the side of the layout to simulate the manual opening and closing of the canvas tops on the AHGX grain wagons.
• A sound file that starts up when each wagon is ready to load, and a digital scale that creeps up as each wagon is loaded, this was to be reset with each wagon load.
• Where is your mate?  Given the distance at a country silo location, its worth considering where your mate is, its rude to have them walk the length of a train to reset a point etc.  Thus additional movements will be required to pick up your mate, and make sure you set all the points at a location to normal before departure.
The Loxton branch, has four locations, Karoonda, Mindarie, Wombi, Alawoola, and Loxton.

Please see below an example track diagram, this is not 100% correct. 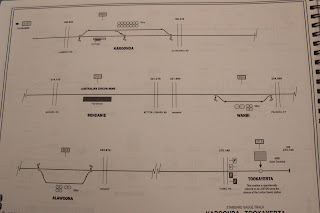 Along with grain operations, GWA also operated a mineral sands train to and from Mindarie.
So from this case study here are the advantages I see.
• Complicated train movements are possible with greatly simplified track arrangements, a definitive cost saving, and construction time saving.
• Less buildings and infrastructure to model, I find it easier to model rolling hills than complex industrial buildings, again another cost and time saving.  Also less clutter, which give the impression of distance, something that is hard to convey with an industrial layout.
• The impression of space is easier to model with less actually modeled, thus increased distance between locations can be modeled, nothing is more reality killing than the front end of a train arriving at station while the back end is still in the other station.
• Modeling a branch line controlled by train order working, there is no need to build and wire complex signaling, but requires issuance of train orders, again a cost and time saving, while being able to model the train control operation accurately.
• Equipment is readily available, CLF, CLP, GM and 422 locomotives and AHGX grain hoppers have all been produced in model form.
• Able to keep more than one crew entertained, such a grain branch line could keep two, three or even four crews busy, further distance between each location means that crews won’t be working “on top of” each other.
• Modeling an entire transportation system.  I understand the reason for staging or fiddle yards, such is so for layouts that model “bridge” traffic.  However, if you can avoid having them it seems to give a layout a better sense of reality, all moves are prototypical.  With a grain branch, its not a stretch to model a port grain terminal.  Lots of shunting, unloading wagons within the limitation of the facility, fueling and sanding locomotives, remarshaling empty trains for going out on “the branch”.

To the point of all of the above, I have sketched a possible design of the Loxton branch in the modern era, please see the image. 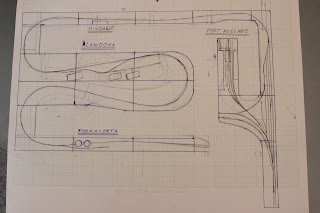 I fiddled with the design, moved and deleted some sidings, I thought it was important to give as much distance between locations, ie model less with more.
Plenty of length was given to the “station limits” of Loxton, and ensure that the rollercoster grades between Loxton and Alawoona can be effectively modeled.
Around the peninsula is Alawoona, on the other side a fair distance from Alawoona is Mindarie mineral sands, this is only a location as there is no siding.  All striping and back loading is done on the mainline.
Finally is a representation of Port Adelaide, thus the entire operation is modeled, this negates the need for a fiddle yard,
Proposed operations:
At its peak the layout could handle at least three trains.
A Loxton grain, Alawoona grain and a Mindarie mineral sands train.
However operations will be a little more complicated and accomplished in a certain sequence, to make it all work.
1. Operations could start with the Loxton job, with a train order from Tailem Bend, departs out of Port Adelaide, once clear of Alawoona, the Mindaire mineral sands job can get a train order to Alawoona, run around and push back in into the siding at Alawoona, thus be clear of the main.  This should enable the Alawoona grain train to cross the Mineral sands job at Alawoona, by taking the mainline.
2. The mineral sands job can then get a train order to Mindaire to strip and back load.
3. The Alawoona grain can then set up to load.
4. The mineral sands job will be the first back into Port Adelaide, the local crew can strip and back load.
5. The loxton job could be the next back into Port Adelaide, the local crew can dump the grain wagons, and re marshaled.
6. The Alawoona grain job would be the final train back into Port Adelaide, again the local crew can dump the grain wagons, and re marshaled.
7. The whole operation can start again, if required and slowly everything will get out of sync, as happens in real life!

Usually there is a shunt crew rostered at Port Adelaide.  This operational scenario would utilize at four crews.

Should be fun, and its worth looking around your prototype for grain operations see what you think.