#338 tanks for filling up Alice Springs. 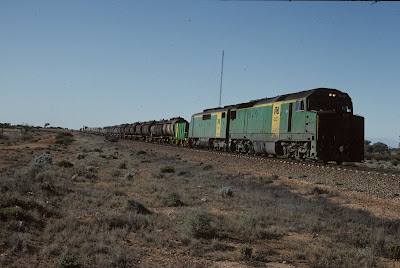 #338 tanks for filling up Alice Springs.
Most of the goods services to and from Alice Springs were 100KPH rated, but once a wek they operated a 80KPH service, which I assumed was for shipment of goods that required rolling stock that was only rated to 80KPH. I was not until I caught up with one of these services that it made sense as to why this service existed, it was chocka block with fuel tanks. When I checked the original track diagram of Alice Springs, its obvious the that there was a lot of competition in fuel sales in Alice Springs. In the original version of the yard, there were sidings to:
In the industrial area:BP, 2 two to three sidingsCaltex one Mobil (SABADIN) two sidings
Merrenie Oil siding which shipped crude oil to the Mobil Plant in Adelaide for refining .
Add to that the two LP Gas suppliers: Boral Gas (now Origin) north end of the yard and Kleen Gas, in the industrial area.
Therefore with all this traffic, this means that there is a lot of fuel related industries to work in Alice Springs.
The other interesting point is how exactly this fill and refil process worked. For example Mobil does not seem to have ever built large fuel storage tanks on site, thus they seemed to have used the tank cars themselves as storage. Thus the delivery and removal process might have been a little more complicated than first thought, as the siding could not be left without fuel. There must have been a continual juggle of tank cars to ensure that they always had fuel available.
Not only would there have been a shunting movement from the yard to The Mobil siding, but also the Caltex and BP sidings, the latter being reversed, so to shunt these wagons a run around move would have to be accomplished in the industrial “branch”. Adding to the complexity is there are two LP Gas sidings, one in the industrial area “Kleen Gas” the other is near the old meat works at the north end of town.
Different types of fuel. It’s fairly obvious that Diesel would be the biggest delivery simply because Alice Springs was a large trans-shipping point, tonnage going north to Darwin would be by trucks – road train. These road trains needed to be fuelled, so for the Railway it was a sort of win – win situation. We deliver the trailers and the fuel for your trucks, to ship to Darwin.
Alice Springs industrial area:
Doing a little bit of a Lance Mindheim, is slowly taking on a more interesting facet of modelling Alice Springs. There is no doubt that the area Lance is modelling is more complicated to operate and has more shippers, than Alice Springs.
I have been fiddling with the arrangement of Alice springs and figured that I will build the yard and industrial section first, and connect it to Barcoola’s fiddle yard to get things going. This way I can do the details n both side of the yard before it is moved into its final place.
Enjoy