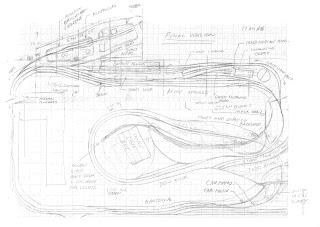 Here is a image of Barcoola MKIII, or Alice Springs and Bow River. As you can see I have been busy designing out as many of the imperfections as I could.

The result is the plan you see here.
the highlights of this change are as follows:
The industrial area is more "faithfull" to the prototype. I have added Smith street, re aranged the indusrties so that the are in correct order, Adelaide Brighton Cement, KleenGas, and Mobil, I have incorporated a runaround within the industiral trackage, this will enable an operator to work on the outside of the layout, without having to swap between sides. This will work in both home and exhibition format. A track to the NTFS depot has also been added, the original 1980 plans show that NTFS had a siding, for ultra modern Alice Springs this will be NQX's depot as it is now. A simple change of signs should be enough, to stop the hard core few.

Barcoola has been moved away from behind the bar as much as possible, and I have added a 2.5 ft bridge between Alice Springs and Barcoola, this will not only act as a scenic break, but also give more space for the train Controller, operators shunting locomotives off at Barcoola will be able to access the point with out inpinging on the work space of the Train Controller.

Tracks in the yard have been reduced from 4 to 3, addtionaly deadend sidings have been added so that Barcoola could accomidate 4 trains 3 in each yard track, and one more in the dead end tracks (if broken up). The TAR main has been included, this will act as the head shunt for Barcoola yard, leaving the CAR line free for normal operations. The switch for the 555Km Quarry is just short of the backdrop, and the line to the quarry will go under the Todd river same as the CAR main, this will pop out the other side on a small shelf below Alice Springs yard. Trains for 555Km Quarry will have to be manually reversed and loaded from this shelf.

Grades:
The main north of Alice Springs, will be grade down untill it reaches the bridge before Barcoola. The other grades are, just north of the yard throat at barcoola, down under the Todd river to level out on the bridge south of Bow River.

Hevatree Gap as been increased in width to a max of 5.5 feet, this should mean that the scenery can do "Justice" to the size of the gap.

With this version, we have 36inch minumum radi and 22ft standing room in all sidings.

Two foot minumum aisle space only at "pinch" areas near the end of the peninsula, the remainder are 3 feet or more, especally in the Bow River - Barcoola area.

For exshibition format, both mainline sets of points at Bow River will have to be powered, this means that "mainline" operators can walk around the "outside" of the Layout with out any problems, and maintain control crossing moves.