Doug is currently on the hunt for a shunting layout that will forfill some of his short term goals.
Doug's tick off list is a location for a string of vans, and enough variety for other operations, yet be able to fit in the train room (a converted Bedroom).

So the following is a suggestion that anyone could take, and I am sure there are other locations for which this concept would work just as good.
I had googled this location a while back and now the more I look at it, this could be the ticket.
Shepparton has a number of siding serving industries to the north of the town, this would have to be shunted by moves to and from the station yard of Shepparton.  However there is no need to model the station, in Doug's current position, this would just be too much.

So the concept is to have shunt movements from the fiddle yard (not modelled Shepparton yard), to serve, SPC, Shell and Caltex, plus the Campbells sidings.  the SPC siding is long enough to swallow up some ABFXs, as I would guess that SPC would ship Australia wide so various vans, would not be out of place.  The oil sidings would also be an interesting prospect, and the gates will need to be unlocked, this could be a great "Lance Mindheim" operational concept with actual locks.  Then there is the usual VR annette lock process which could also add to the operational complexity.

I would expect that each of these sidings would be serviced from Shepparton by separate shunt moves, thus to shunt all these locations, would need movements to and from the yard.

You also have the opportunity to operate Tocumwal trains through the scene, which could be the continuous run.

Further more, you could also have trains wait off on the Dookie line, and contact the Shepparton box for permission into the yard.

Check out the 1973 signal diagram of Shepparton showing the Campbells soup sidings and the SPC siding.
Around 1982 new joint Shell, Caltex sidings (diagram) were built on the Dooke line, here are some pictures of the down end, some pipe detail, and more.

I will provide an example track plan soon.

Below is an example track plan, on the inside is the three siding north of Shepparton, the SPC siding, Shell and Total sidings, and the Campbells Soup sidings on the Dookie line.
On the Tocumwal line I have included a generic line station, that can be serviced by grain and flour wagons, the Tocumwal line has a continuous run, if required. 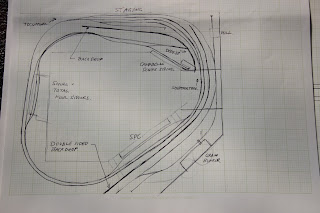