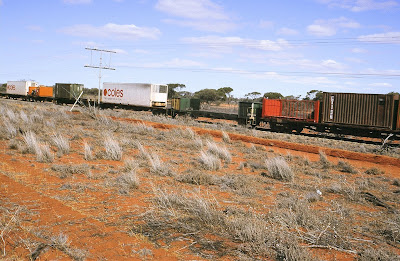 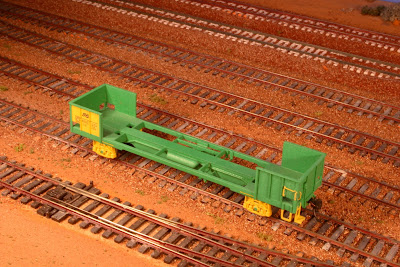 The AQUY was a one off, experiment recycling old OBF 4 wheel wagons, this was the same time that TTX released the forerunner a four wheel TOFC car. The OBF was produced by SAR into at least 1977, yes I know it is hard to believe but its true. The last series had roller bearings and coil springs. I guess AN were looking at a program that might be able to reuse relatively new wagons in a more efficient role.

The AQUY was re-built from an OBF, stretched to 40ft and fitted with twist locks, the wheel sets were Uni from Forrunners and modern British four wheel wagons. Basically a AQUY was a containerised version of a Roadrailer, just with more Tare weight.
According to now defunct magazine Rail Ausatralia issue September October 1988, the AQUY 1E was released to traffic by 14 September 1988.

Like all of AN's little experiments it was thrown into service on the Alice Springs line.

This is why the Alice Springs line is worth modelling.

Modelling notes:
The only way to effectively model an AQUY is to scratch built it.
The axle boxes can come from hornby modern wagons.
Attached is a photo of Glen Thomson's scratch built model.

Please see attached pics, one of the prototype on #166.
And Glen's model.