Hi All
At the Caulfield exhibition on Melbourne, Aucision released the AN AHGX.
This model has opened up a number of potential modeling locations in Grain growing locations across SA, and across the boarder in Victoria.
The AHGX was a true all rounder, operating on Broad, Standard and Narrow gauge. (Port Lincoln division)
I know what you are thinking, what use is a AHGX when I am modeling Alice Springs?  however, the Recorder published a photo of a AHGX in AN livery in Alice Springs.  I seems that the service is not dead in AN times, and the AHGX was used to deliver feed grain, complete with auger positioned for delivery.

The AHGX would be a great addition to any future triple gauge layout.

The model itself is a very good rendition of the prototype, separate roof walks, good end detail.

The model represents the mid AN era with a solid AN symbol, later versions have a AN symbol in stencil form.
Lots of good weathering to accomplish with this model.
Norm Bray has some good shots of AHGX on his website.
http://www.flickr.com/photos/60901191@N08/sets/72157626794958030/ 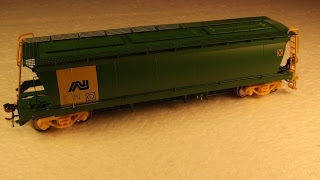 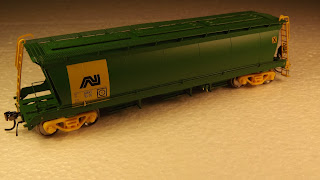 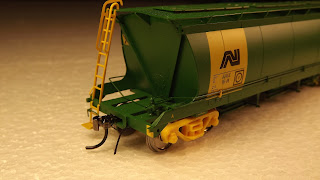 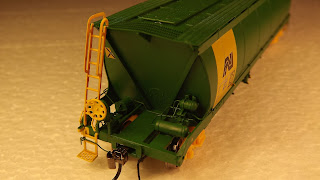 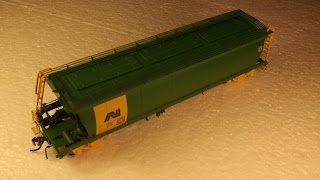 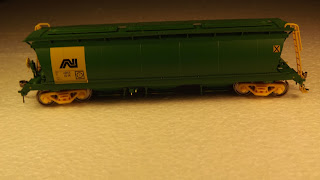 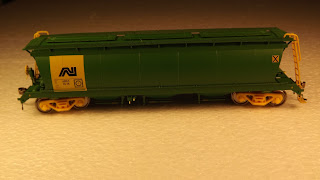 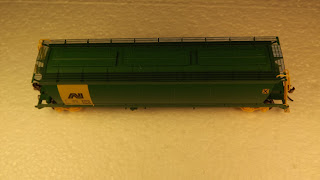