Pimba Railway Station a location to model in AN

When I was in my very early 20's I came up with this plan for a layout based on Pimba SA, this location was  the first stop of the Tea & Sugar #4205 slow mixed goods.
My plan at the time was based on the club room size.  The concept, centred on the trains that passed through this location in daylight, which would be:

At the time, Pimba was populated with AN maintenance staff, an number of standard house were positioned behind the station building.  Pimba also retained a very wonky goods shed, the platform of which can be seen in the left hand side of the photo below.
Other buildings included a water tank, and barracks.

The yard also had a triangle with a number of sidings leading off, this included at one time, a pressurised concrete silo (portable).  During the construction of the Olympic Dam - Roxby Downs project, AN  ran a number of dedicated trains from Port Augusta to Pimba to deliver Concrete in pneumatic hoppers.  I had also seen at least two gas tankers positioned at Pimba, I assume for transfer to road tankers for delivery to Olympic Dam - Roxby Downs project.

So at the time deliveries to Pimba would have been, #4205 town supplies.
Dedicated "Roxby Rocket" which could deliver any of the following:
Water tanker.
Concrete hoppers.
LP Gas tankers.
Fuel tankers.
Goods vans, with equipment for the maintenance crew.
Flats loaded with earth moving equipment. 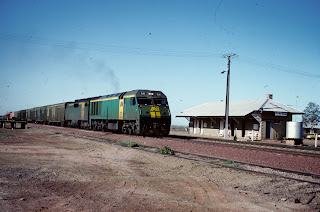 EL and GM combination, haul SP3 past the still standing station building in May 1992.

Some shots from Weston Langford site of Pimba in 1967. 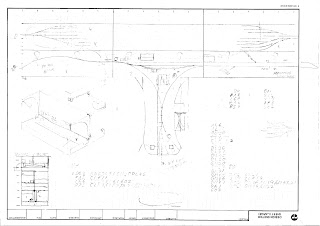 Above is an example of the plan I designed for Pimba, I had designed a board, that on one side had the fiddle yard, on the other side an integral light box, which would be strong enough to support other boards.  I really like the "nothingness" of Pimba, and serious looked at this for a design.  However, my plan was flawed in a number of ways, firstly too two dimensional, the light box would have made viewing awkward.  Secondly the grade coming up to Pimba was pronounced and such a feature would be lost in this design.  Also the trains would be short about 12 to 13 feet.

So if you are not really keen on trees and like AN Northern Division but want some place to shunt, this might tick that box.  Not too long ago, I created another design based on Pimba for the current train room, and I called it "Wirrimpa".
Anyway I hope, this presentation provides some inspiration.


An update on Alice Springs progress, I have wired and made operational the NTFS, Freight Forwarders siding.  The new head shunt and lead into the yard.
Roger gave the two thumbs up to the slightly extended version of the industrial area.

I hope to get some more progress on Alice Springs yard, over the Easter Weekend, as I have some time off.
For those of you that have it off, from all of the crew at Barcoola, we wish you a happy Easter.