Below is one of my early layout proposals.  Again designed in my early 20s, was flawed by both length and way too much to accomplish. Still, it was the second "serious" layout, that made it into the construction phase.  The concept was for an exhibition layout that was not straight and 'boring", yet ticked off all my "then" requirements.  These requirements mainly centred around being able to operate both Alcos and the more modern locomotives.  However almost all the boards were actually built.  The locomotive workshops and leads are currently in the shed.  Doug has the four main scenery boards under his house.  The fiddle yard mophed into the first version of Barcoola's fiddle yard. and currently resides with the rest of the Club equipment in Leon's loft.
The complicated triangle board, was scrapped.
The mainline track was scratch built.  At the time of construction the only concrete track available was PECO 100, but the correct pandrol clips were available in there individualay range.  Yes, I built the platform road with 4 timber sleepers for every one concrete sleeper.
The other nail in the coffin is all the other points on the layout were early shinohara, really bad conductivity  on the blades. 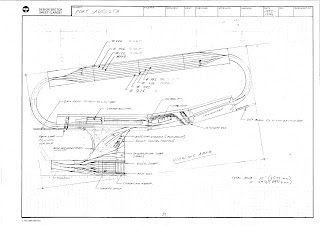 Above is the initial proposed track plan.  Designed to fit in the then club rooms. 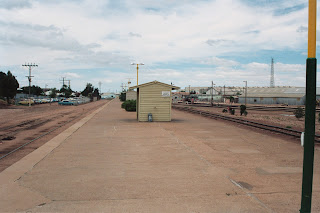 Port Augusta station platform looking east, to the left are the back roads and Motorail loading ramp.  This is now replaced by narrow gauge track and a train shed for Pichi Rich Railway. 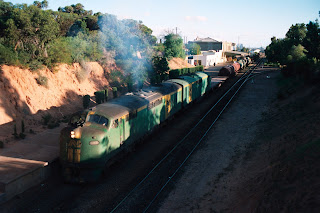 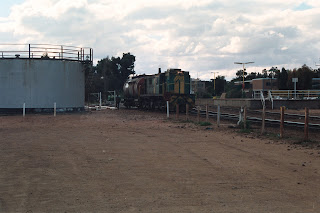 859 shunts the triangle fuel sidings, to the right is the end of the platform. 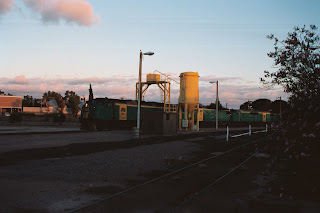 CL DL and GM under the sanding towers at Port Augusta. 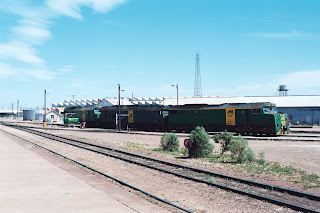 DL BL DL at the fuel point, the expansive wagon and coach works are behind the locomotives. 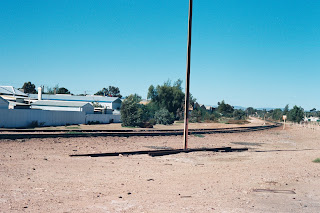 Looking east out of Port Augusta, a Narrow Gauge turntable is now situated between the mainline the back fences. 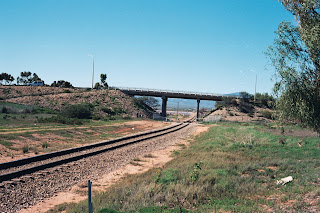 Highway One overpass looking east with lake Knockout in the distance. 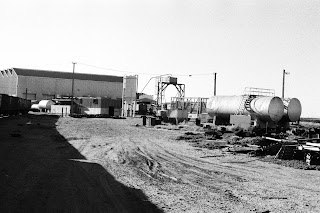 The Locomotive workshops,  I built the front and one side of this building. 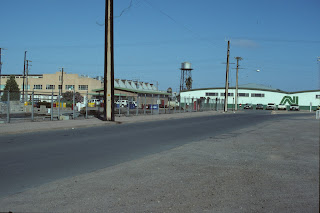 AN retail, is to the right, with the ever modest "tiny" AN symbol on the side of the building.

In the end is was just too much work for not much return, lots of buildings without much operation.  However was a learning experience, plus my carpentry skills have improved much since then.

If I happen to retire with a 12mtr by 12mtr room for building a layout, I might again contemplate Port Augusta, as a layout.  but I have at least three other layouts in the pipe line after Alice Springs and Port Augusta isn't one of them.

Alice Springs update.
The "Gap" board has been positioned and mapped out, the east end of the yard has been mapped out and the position of the turntable has been finalised.
All the additional legs have been cut up in kit form and I have started construction of the new legs, for the rest of the layout.
Probably by the end of the week I will be just waiting on the track!