Barcoola up and coming projects

Another year is almost over, and here is where my head is at:

Murray River Bridge has been far and wide this year, including Adelaide and Sydney exhibition, next year it looks like it might be going to Perth, this will be a first for us.
However with Cheakamus Canyon needing to be at an exhibition in Victoria a week later, so, it seems I will need to build a new fiddle yard for MRB.

Barcoola:
Barcoola MKIII is now a strong reality, as it is expected to go to a least one exhibition next year.
I would like to construct a proper light box for all the scenery boards, and replace some of the oldest boards, maybe, replace the yard with one that better replicates Tarcoola.
Install point motors in the fiddle yard, with a new control panel to make the layout more operator friendly. 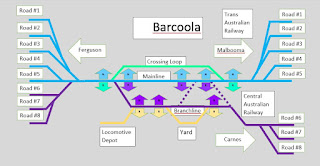 Barcoola MKIII will require lots of more locomotives and rolling stock to be added to the fleet, I’ll settle with an era of 1990 for this too. GMs, ALs, lots of CLs (in various stages of fade) DLs and a few ELs.

Other projects, in the pipeline are:

Caltowie, 1987.
An interesting time on the standard gauge, I would expect to be able to reuse the fiddle yard from MRB.  I have been fiddling with plans for awhile but I think I am close to a final design.

Greenough River Bridge 1994.
It scales out to just on 6ft, I am looking at a single board operating diorama for this, the location is just too tempting.

It may sound weird but a V/line Pass layout (in winter) is very tempting, short trains, and SSR grain trains, on a layout no bigger than two boards again an operating diorama.

Esperance.
I have struggled for a good location for a WA HO scale layout, and we are not out of the woods yet, but I have come to the conclusion that another mainline layout would break my rolling stock bank.
I have looked at both of the branches from Kalgoorlie and there are some great operating rules in there for the L class, I am surprised where they were not allowed to go!
For the Esperance line, in addition to the ore trains, there are three regular good trains,
The yard itself has fuel sidings (a short branch) end and side loading facilities, and a Goods Shed.
Just north of the yard is a salt loading facility.
The yard itself is a staging point between trains arriving from the north and shunt moves down to the port.
Consists are split as required, to be dumped as manageable rakes.
There are other workings too, Containers and Nickle in buckets (kibbles) staged in the yard then taken down to the port when and as required.
When in season, a short rake of WWs grain hoppers were also used between the Port and bunkers up the line.
All movements between the Port and the yard needed permission from the local ‘Co-Ordinator”
Thus this location has some real operating potential.
Other advantages are train lengths can be fairly short.
15 wagon grain trains.
10 to 15 wagon general freight trains.
Maybe 40 wagon ore trains, are all short compared to mainline trains.
So the yard can be modeled shorter.
Now here is the kicker,
You can model ore dumping operations without the need to model a dumper.
You can model Grain operations without the need to model a grain bin or dumper.
You can model loaded or empty nickel operations, without the need to model the unloading operations.
Esperence is an operating "fiddle yard" for want of a better term.
In ultra modern its still interesting, however the yard has drastically changed.

It still going to cost me a stack of WOs,but it is what it is.

There is some good historical aerial footage at Landgate, a WA Government provided service, check it out, its great for older footage of a location with surprisingly good definition.