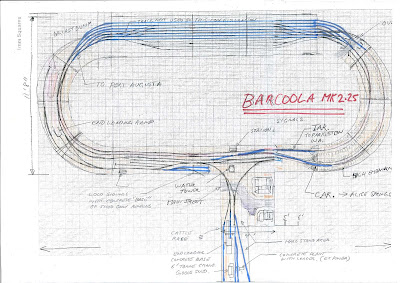 Please see attached the Barcoola MK2.25 for installation inside the current train room. Trackage in blue is new or re-built trackage. sidings at the end of the triangle have been extended, also locomotive siding have been added. I saw an early 1966 shot of Rawlina (been there and walked around in the yard by the time I got there the loco sidings were well and truly gone) a great shot of the the left over of the locomotive shed and though it would be great to replicate on Barcoola.

To clarify for ultra modern Barcoola, I have a number of containers, wagons and locomotives that would fit the era. This includes 3 NRs one of which has been rebuilt with the correct frame width and bogie length etc. The austrains model is very close and at first glance looks spot on.

We have more than enough components to build 8 FQWYs 4 RQWY, and oooodles of containers.
locomotives, 2 vanila NR's (to be modeled, the most faded first) and one in Ghan colours.
A couple of CLF CLPs in GWI.
One commissioned FQ.
A G class, Peter still has options on this one.
QRn stock and 6000C class locomotives TBA.

The scenario is that in 2010 Barcoola has had a major economic boost due to the mining boom. GWI has been contracted to deliver, supplies to Barcoola, which is now the rail head for supply a mine close to Barcoola. In coming goods are:
Concrete.
Water.
Diesel fuel
Out of gauge equipment, dump trucks etc.
empty containers.
Dry van goods.
Refrigerated goods.

If you have read the history of HI you can imagine what else needs to be imported, and then you will understand, why the Ginacood Hotel co-owners have ordered a new F6 and GTS each!!

Ballast, with a separate ARTC train.

BHP have learnt from the mistakes in north west of WA have are looking at creating a more "harmonious" environment for workers, and guys have been spotted on the outskirts of Baroola with white Toyota hi-luxes plotting out "barcoola Heights" the new desert suburb!!

The Train number will be XB1 and BX2, but as 4205 was always known as the "tea and sugar" or just straight "the sugar" XB1 and BX2 will no doubt be called the Chuppu Chum, not quite the sugar, and sucks that little bit more.

So in short get prepared for ultra modern Barcoola.
Posted by Scott at 18:23