We all strive for design perfection, with the design change on Alice Springs, where the stagging yard was folded in on itself, i thought that this could help with my previous Spencer Junction and Whyalla layout designs http://barcoola.blogspot.com.au/2012/06/layout-proposal-spencer-junction-sa-and.html

So i put pen to paper, and came up with the plan below: 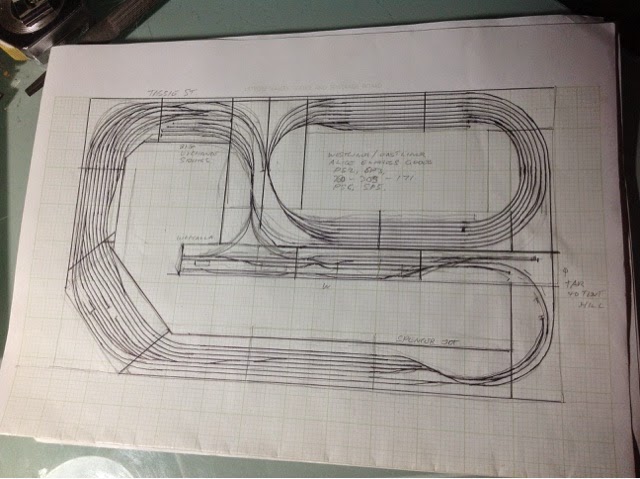 This is more of an opeational concept layout, learning from Alice Springs, which is limited by access.  This realy bugged me.  Modifications I have designed should solve these problems.  By having the stagging yard isolated, it also alowes the layout have plenty of space for train control and train storage.

Plus some shot dead end stagging tracks for short trains such as 305 arvo junk train from Port Pirie, the Telford mixed, etc.  There is also room for steel wagon storage, as this has to be shunted to and from the steel works, so the AN crew can drop off and pick up steel wagons.  It would be a great little job for the stagging operator, shunting steel wagons with a DH.

Whyalla..
Whyalla would not fit into this location in it current form, so I made this a mirror image of the real Whyalla.  i find that if I get a close as possible to the prototype track plan that, modelling is just so easy because what is there is ..... Well there, so you know what you need to model.  The other thing is that shunting the yard you end up dealing with real operational problems, because you havew mimiced the real yard.

Sure the distance between Spencer Junction and Whyalla is short, but again its a train order territory thing, so lots of procedures etc that should stretch the ops session timing.

i must have spent hours and hours observing AN shunting operations, at Spencer Junction.  The key to this part of the layout, is the making and breaking up of trains.  i would envisage that we would have an incoming crew, which would bring the train into the yard.  They would be relived by the shunt crew, or the on going crew.  They would shunt, off etc then get orders and continue on to Tent Hill or Stirling North.

Operators and People....
Asles and widths, I looked at around three feet, Lance is right on that one!
Also needs a congragation area, this worked well with Alice Springs, so it has an area that is wider than three feet.
Separating stagging operations, from normal "stage" operations, with  the stagging area having its own  well, this encourages the stagging operator to remain, at their post!  Clear delineation, between these types of opeations would be good, with Alice Springs I found that doing two jobs, operational and control can be difficult.  With alot of trains to operate, comes a change of roles, and more people required to maintain a timetable.

Train lengths.....
Previous plans were limited with train length, and then there was the distances between points.
With this plan, we can get 23ft trains on the mainline wtih ease, the siding in Spencer Junction yard are  longer than that, but I think I can use the yard access roads as a limitation to train length, crews will know they are over length there train fouls the access.

Anyway, food for thought, i will see how i go.