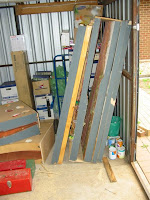 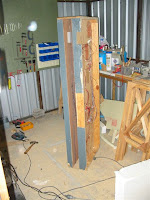 These are pictures of the current state of the old scenery boards for Barcoola.
It as a little harder than first thought to "thin down" these boards, basicly the boards were kept together in their transit format. The legs and ancillary items were removed. Each transit end was removed one at a time and any screws were removed from the proposed location of the cut. The transit ends were then re installed and screws temporarly installed to hold the transit ends in place while the boards were cut down using peter's circular saw (thanks man).

The end result is shown in these pictures taken in my work shed.