With Murray River Bridge on the home straight, my thoughts have turned to the next big layout.

Concept: Kanandah NSW, AN Broken Hill line.
This is based around the west end of Broken Hill, from Gypsum Street overpass to half way through Kanandah, the first SAR built crossing loop west of Broken Hill.
Named Kanandah in 1974, serves a multiple functions,and there are two industrial "branches"
1. An Oil branch with Mobil, Shell, BP and Caltex all served.
2. Sheep and Cattle sidings.
3. AN and SRA used this location for locomotive fueling.

Silverton Tramways: South mine.
Thanks to SDS releasing the AOQF we can now effectively model Broken Hills South Mine.
The load out has some great trackage, and operationally its very labour intensive.
rakes of wagons have to be shuffled between the yard and the mine.

The layout would use the fiddle yard I built for Murray River Bridge, and would have the same foot print as Murray River bridge with the addition of three more boards for the South Mine.

In the layout room this would still be walk in, and also allow the aircraft delivered layout set up without any interference.

Here is an image from lionel Noble Kanandah is highlighted in yellow.  The train is heading east. 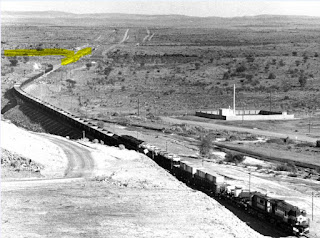 here is a proposed track plan of Kanandah and the South Mine.

Click on the link for the operational instructions for Kanandah and track diagram, on Lionels site. 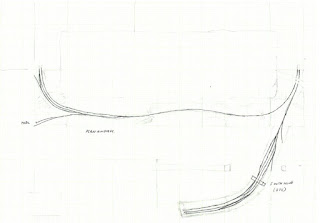 here is a view of the Mobil depot. 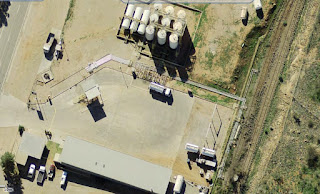 Here is a shadow view of the proposed model area. 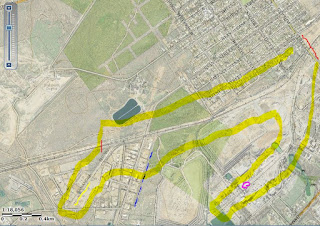 I find it challenging designing layouts to fit a location without smothering it with track and making it easy to access.
operationally you could have three crews working this layout.
AN crews, moving wagons back and forth between Kanandah industrial sidings.
AN crews working mainline trains and the SRA locomotives for fueling.
STC crews working between Broken Hill yard and the south mine.

Thanks to SDS this is now a modelling contender.

here is some video footage in the PN era