The arrival of the Bowser C636 has given me a stack of inspiration for designing a Pilbara layout, i had previously posted a BHP and HI dual layout.
http://barcoola.blogspot.com/2012/12/proposed-pilbara-layout-bhp-and.html

This was way back in 2012, and i have had a lot of time to figure out how to make this all happen.
The big problem i was struggling with was the empty and loaded operations, sneaking back tracks etc, which usually meant that there was always operations that were not really prototypical.  Or if i modelled one end ie a mine this would mean mid session i would have to unload all the cars from the hidden sidings, this is where they would fail.

On the flip side modelling a mine and a port would take up a lot of space.  Placing them back to back would solve this in the short term. However again the problem is the feeding the empties and loadeds through in a realistic fashion while only modelling half of the port and half of the mine and making it work.

I then came across some shots of Mt Newman Mining operations when they first started in 1969, now this is extremely gettable! Five C636s and two F7 for power and a stack of second hand cars and the dumper.  I was looking at the buildings and I swear they are straight from the walthers catalogue!

So the results of the doodling process is the plan below. 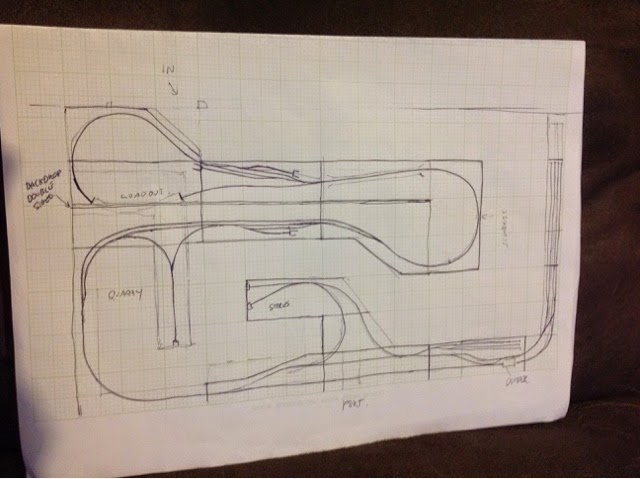 This will fit in the current layout room, and to give you and idea of the operational concept of this layout as follows:

ore cars would be manually be loaded at the mine by placing an ore 'lump' as the crew loads the train. This can be done in reverse, through the dumper, there is a prototype for this at Newman.

Having the crew load the train and dump the train, will mean that they can't cheat by doing too quickly.

Trains of about 15 ft, should be easily handled, however larger trains can be worked, just needs to be one large train.  Thus could have the mid train helpers etc.

Unloading will need to be done two cars at a time as they go though the dumper.  This could be mechanised, in the future.

There is plenty of space for ancillary trains such as fuel and supply trains to the mine.  These will have to be marshalled at the port, and then shunted at the mine, tankers decanted and returned to the port.

ballast sidings at the intermediate crossing loop, this means that ballast trains can operate over the line with meaning, place to originate from and depart to.

i would look at this layout being able to model multiple eras and locations.  Mt Newman early and late. BHP, around 1992.  Robe, early and late.  With a change of bridge board, could also HI Alcos.

anyway lots to think about and locomotives to finish off, rolling stock, i will keep it bubbling away in the background.

i will keep this plan in my head and just have to crack the 3d printing learnings so that i can get some decent ore cars.

I will post some inspirational shots later, thanks scott