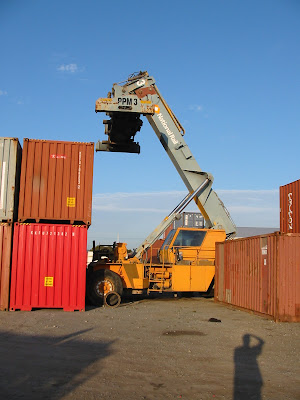 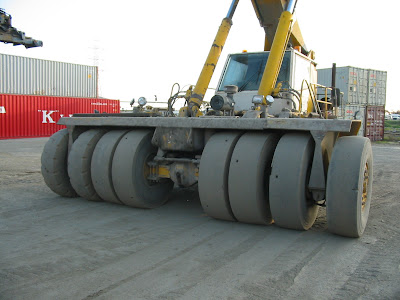 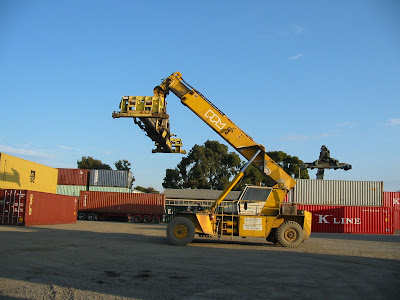 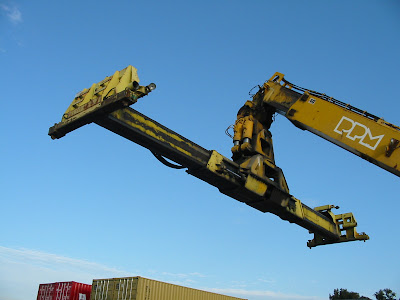 Alice Springs yard was rebuilt from narrow gauge to standard gauge over a period from about 1978 to the end of 1980. In this rebuild AN redesigned the yard to be more intermodal friendly. For example the Gantry crane from Larrimah, now dominated the yard and almost one whole side of the yard was dedicated to intermodal requirements. Along with the gantry crane, they constructed a end loading platform with two tracks serving the platform. The yard was redesigned for one entry and one out with a defined traffic flow alot like more modern terminal of today.

When you look at the yard it is a creation was way ahead of its time.

Even during the narrow gauge days intermodal operations, ie Truck on flat wagon and containers on flat wagons were becoming increasing popular methods of shipping goods to the red centre.

It made sense that this trend would continue, and AN had planned for it.
As Standard gauge operations commenced, it became obvious that the one gantry crane and end loading platform, was reaching capacity.

To throw more capacity at the situation, AN Purchased the AFIY AFWY's from the USA along with some fifth wheels to fit to older 45 and 56ft flats. This would slow the down time lashing down trailers etc.
The PPM piggy packers were purchased in 1985 (by their build dates) from the manufacture in France, one for the IFT, the other for Alice Springs. It was the dawning of a new age in intermodal. The PPM were 92tonnes in weight, and were capable of slide loading an AFIY AFWY AFSY, in seconds flat.
I am told back then this was the first such purchase for this type of work in Australia.

Obviously the PPM all worked in the confines of the IFT or Alice Springs yard so to get up close to them was pretty much impossible.

Years later lots had changed, newer side loaders became available with greater capacity and it became affordable for smaller freight companies to own side loaders. The PPM were replaced by newer equipment, NRC etc came an went.

Fast forward to 2004, I was kicking around Dry Creek north waiting for a train to roll by when I noticed a piggy packer working inside a freight companies yard, that backed on to the mainline, and it looked strangely similar to the ex AN PPM's. Deciding to ditch the train, I traced back to the companies yard from the road side. Peering into the yard I confirmed, it was infact and Ex AN PPM side loader, still in full AN livery. The guys in the yard were quite happy to let me take pictures, these are attached. They had another PPM this was painted in NRC colours.

Anyway if you want to start modeling intermodal, start looking over the fence, you might be surprised what you might find.