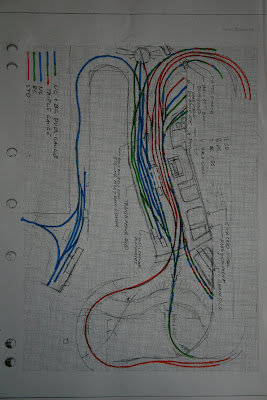 We are all victim to imagineering, and I am no different. A mate who was heavily into prototype Broad Gauge has decided to call it quits as a hobby. Thus he is currently selling up all his BG equipment, all of it VR. But it also included a number of pre made points including one double slip.

As paper and pencils are relatively cheap I worked on a what if plan that could fit in the train room.

Inspiration:
Gladstone is the smallest of the three triple gauge stations in SA, thus the easiest to model off. The only sections I used was the fact that the BG came in from the South west of the station, the NG departed from the north east.

The rest takes sections of key scenes of the area.
The BG - NG head shunt bridge, think of the Hamley Bridge but smaller, Micro Engineering market a very similar type of bridge.

Sweeping reverse curve for the standard gauge, in the vogue of Huddlestone bank, but add a curved bridge and an abandoned NG bridge.

other features include:
overhead Ballast loadout, used to disguise the end of the backdrop.
Ginacood hotel sub-planted into the town.
Ford dealership on the corner, IE same rural version that exists in Crystal Brook.
Silo complex at the end of town, same as in Gladstone.
Transhipping shed - good shed, per Gladstone.
Caltex depot triple gauge served.
Foodland supermaket, signature in this part of the world.

for the BG equipment I already have two BG converted 930 class locomotives and 12 ADHL's.
NG only a smattering of rolling stock, but I have already scratch built a NT class body, don't ask why, I built it back in my teens.

The inspiration is the early mornings in the northern wheat belt, the sort of sleepy valley towns with low fog still hanging around, as train can be heard clearly down the valleys, to momentarily interrupt the rural serenity with a five chime of a DL, flashing through town with a late running SP5.