he ABFX and AOOX’s have a arrived form Auscision. Yes very faithful to prototype and will be a great addition to both Barcoola and Alice Springs. Initial impressions are good, I have tested the cars on the Alice Springs industrial area, with the exception of the NTFS siding the wagons make it no problems. The only thing that lets them down is the lack of weight. This should not be a big problem, as the ABFX’s doors are sealed, so placing weight inside should be easy. The AOOX’s however I will have to be a bit more inventive. Possibly add the weight using a load.For Barcoola the ABFX is a welcome addition, given that the fiddle yard was increased in length substantially, there is more space for a lengthened SP3, which was a regular hauler of both ABFX’s and AOOX’s. The ABFXs’ could loaded with all types of loading, given the generous door opening, the only problem is that you could not see what it was in transit. The AOOXs however were used for various loads which you could identify, such as:
BOXCAR shipments, where the tarp load would match the Eastern states loading gauge., its and impressive loading, and tarping job.
Coal from Newcastle, which was going to Hotham Valley Railway, for mixing with Collie Coal for burning in their preserved steam locomotives. From the eastern states loaded with containers, placed on old tyres, to stop them moving around inside the wagon. Modeling an empty wagon in such service remember to have the tyres strun around the floor of the wagon.
Obviously long steel products from Whyalla, going both east and west.
Departmental use including, as a repository for all the wooden spacers installed between the packs of pre cast concrete sleepers, as part of the AN resleepering project. These wagons were used to collect all these blockings between each sleeper layer, and have been noticed in Tassie Street yard loaded to the gunnels with blockings, looking like a big game of pick up sticks, as they were not loaded in a orderly fashion. These would be sent back to Monier and reused to create more concrete sleeper packs.So pretty much in the AN era these wagons were a jack of all trades.Post the AN era, the AOOX, still got a lot of work carrying long product steel.
A pipeline project in Victoria also enlisted the help of the AOOX. 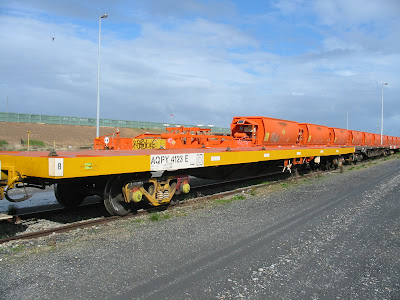 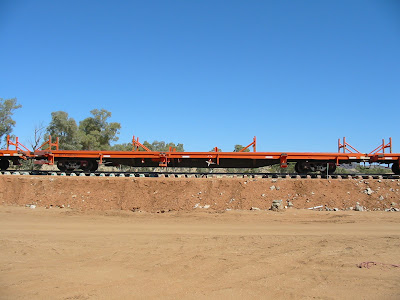 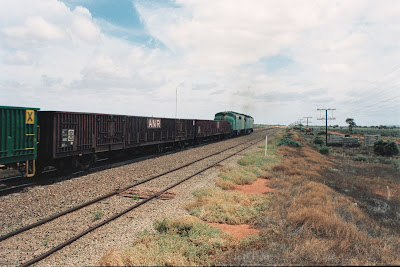 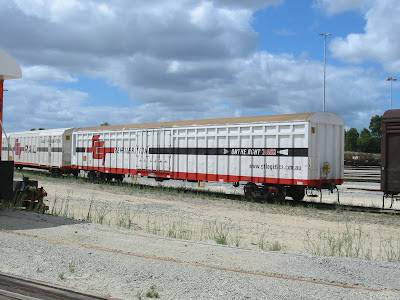 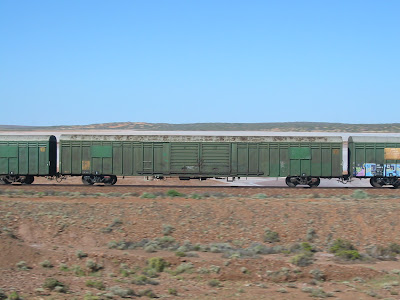 I have operated both the ABFX and AOOX's on the Alice Springs industrial area, nice...
Thanks